The city of Siena in Tuscany is recognized as one of Italy’s most emblematic towns, with a glorious artistic legacy, intricate street layout, medieval towers and astonishing palaces that take us back to the period of maximum splendor of the Italian Renaissance. 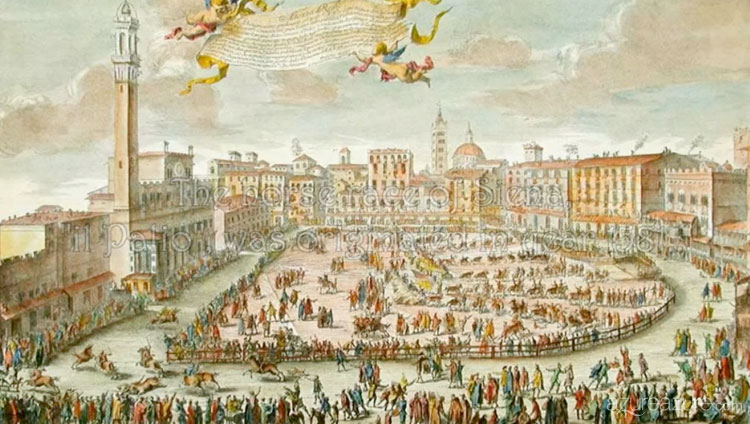 Siena´s international fame comes from the famous horse races (dating back to mid-15th century), which take place around the beautiful Piazza del Campo, a circular amphitheater in the heart of the city, perfectly suited for horse racing. The race takes its name after the symbolic prize: the Palio, from the Latin pallium (woolen cloak), an elongated rectangular silk banner hand-painted for the occasion.

The Palio di Sienna is a competition among 10 of the 17 contradas (city districts) that make up the city. It takes the form of a medieval spectacle, a horse race that is held twice a year: on July 2, in honor of the Madonna of Provenzano, and on 16 August, in homage to the Assumption of the Virgin Mary. 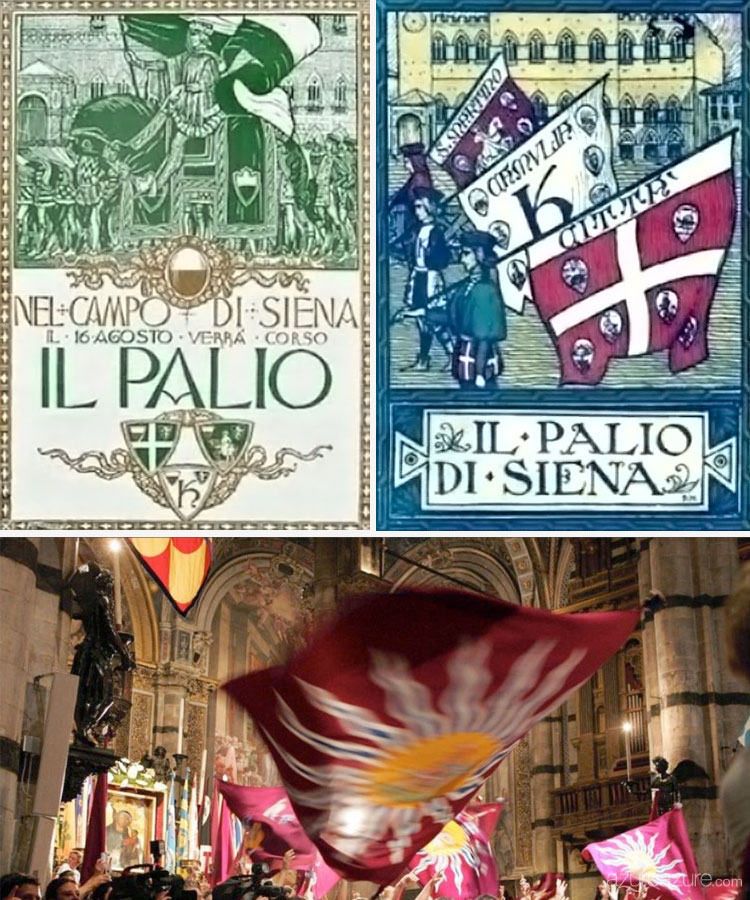 Siena becomes a festive, bustling city during the days leading to the Palio. Its streets are beautifully decorated with colorful flags, banners and medieval costumes. The carnival-like atmosphere brings out locals dressed in the colors of their districts, singing, drinking and dancing in the streets. Formal and informal rituals take place in every contrada, showcasing their pride and honor. The energy that surrounds the Palio di Siena is similar to the Super Bowl in the U.S. It awakens passions and rivalries, dutifully expressed in a jovial, playful tone with characteristic Italian charm.

The event’s rituals have not changed in centuries. At dawn on 16 August, city folk come to the Mass of the Fantino (mass of the child Jesus), and later the loud sound of a cannon announces the beginning of the provaccia, the final test that confirms if everything is in place in the Piazza del Campo. Afterwards horses and jockeys return to their respective districts alongside proud neighbors to ask for good luck at their local churches, where priests bless both rider and horse. Then the jockeys, followed by their entourage, converge in front of the Government Palace at Piazza del Duomo to begin the Corteo Storico, a procession through the center of town, featuring pageboys, knights, princesses and a host of medieval characters carrying badges and banners that represent their districts. For two hours, and to the solemn sound of ceremonial drums, they will re-live the glorious magnificence of Sienna of yore, when it rivaled Florence as the most important city in Tuscany.

Following the parade, silence takes over Piazza del Campo as spectators anxiously hold their breaths prior to the race. Riders and horses take their place at the starting line, proudly displaying their livery and reinforcing centuries-old rivalries. The entire crowd roars with the sound of the cannon and the race ensues. It will take only 90 seconds to circle the Piazza three times, maneuvering dangerous curves that can result in falls and injuries for both rider and horse. The Curva di San Martino has a particularly bad reputation. It is not unusual to see horses finish the race without their jockeys, who give their all to honor their contrada. The winning district will celebrate in high style, but not before going to the Church of Provenzano to thank the festival’s patron saint. The enthusiastic revelry lasts all night and everyone is welcome.

We do not recommend staying at the city center during the festivities, given the huge agitation these generate. Much better lodging can be found, for the occasion, on the outskirts of town. One example is the Aia Mattonata Relais Hotel, a fully restored 16th century manor house with 5 well-maintained rooms, where you have private access to whirlpool, Turkish bath or refreshing dips in the swimming pool, set on a Tuscan garden with spectacular views. The cuisine in Siena is characterized by natural flavors and particular aromas that come from the generous use of garlic and herbs such as fennel and tarragon. A good place to sample delicious Tuscan dishes is Taverna di San Giuseppe, located in via Giovanni Dupré, a traditional spot serving typical dishes such as pici, thick hand rolled pasta; ribollita, vegetables and beans soup served over toasted bread; mixed roasts, pecorino cheese, minestracci (vegetable stew), local mushrooms, and Monticiano wild boar. And let’s not forget about the great local wines such as the Chianti Colli Senesi, Colli dell’Etruria Centrale, San Gimignano, Brunello of Montalcino and the noble wines of Montepulciano. The Palio di Sienna is a festival that will stay in your heart; and Siena, a place you will want to visit again. Or as Italians say: sarai sempre nel mio cuore (you will always be in my heart). ■