Dylan Lauren: The Sweetest Girl In The World

Dylan Lauren: The Sweetest Girl In The World

On the occasion of the opening of Dylan’s Candy Bar in Miami Beach, we sat down with the company’s founder and CEO, Dylan Lauren to talk about the evocative stores, her childhood memories and her accomplishments as a consummate, successful business woman. Dylan Lauren is the only daughter of fashion icon Ralph Lauren and author Ricky Lauren. Being part of American fashion royalty has left an undeniable mark on her personality, and also a great responsibility in front of her family’s commitment to elegance and good taste. When she was 38-years old, she embarked on her own journey of discovery, taking the family name into her business ventures with the opening in 2001 of Dylan’s Candy Bar in New York City, the world’s largest candy store that offers a suite of services and experiences, alongside a vast selection of candy and candy inspired products. 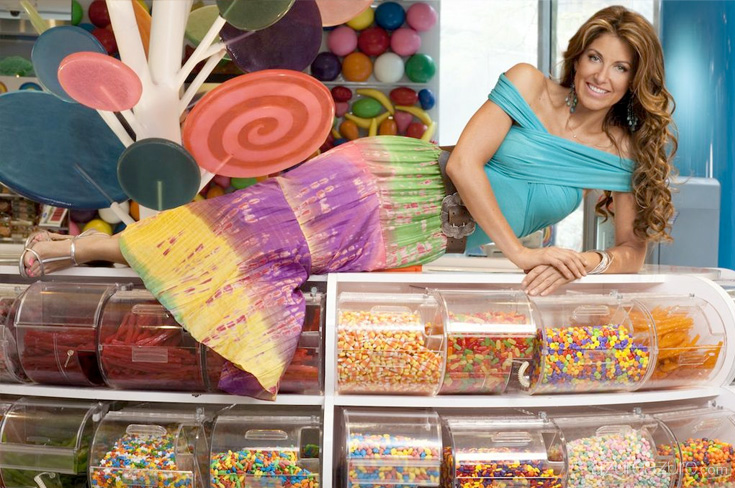 Born in New York City in 1974, Dylan’s childhood was as happy as we might envision, born into the quintessential American family. But at the Lauren household, things were more normal than we would imagine. “I think I have very down to earth parents. My parents are very low key and actually very normal. The public has the perception of my father as the king of fashion, but when he comes home he is just a family man”, says Dylan of her famous dad. When we asked about house rules and discipline during her formative years, she quickly replied, “My parents weren’t very strict. I don’t really remember rules. They just wanted us to be good people and respectful of others”.

This kind of solid foundation is what drives and keeps the family together. The Laurens are a tight knit clan that is supportive of all its members. “I think my parents are above all very close friends and respectful of each other’s independence”, says Dylan about her parent’s long lasting, fairytale marriage. Her mother, Ricky Lauren, is the epitome of elegance. Always radiant and more beautiful everyday, Ricky appears perfect in every photograph, at every event, in her books. “My mom’s artistic sense, her love of watercolors, photography and entertainment has influenced me tremendously, even if I am more of a working woman than she is. She has taught and encouraged my brothers and I to be successful and independent with our careers.” Ricky’s advice to her only daughter: “do what you want because that is what you are going to be good at, follow your gut and live well.”

Dylan Lauren has two older brothers: Andrew is a film producer with successful indie titles under his belt like the Oscar nominated The Squid and the Whale, and David, who is married to Lauren Bush, granddaughter of President George H. W. Bush. He is the only sibling that works for his father’s fashion empire.

Growing up, Dylan admits she was a bit of a tomboy. “I always tried to beat my older brothers at everything we did, so I became active in sports from a very early age.” In school she was captain of the volleyball team and active in other sports like tennis. She also had time to show off some of the clothes her father created just for her. “My father designed a blouse after me”, she says with pride. An iconic piece in her father’s collections, the Dylan blouse is white with ruffles. “I remember wearing it at age 7 with a white skirt and a pink or turquoise sash. It kind of looked like a dress. My girlfriends at the time didn’t think much of it, since we did not know much about fashion at that age, but now I realize it is a classic.” She only became aware of her father’s relevance when friends started asking for discounts on her dad’s creations. Otherwise, her fashion style has not changed much from the jeans and sneakers of her college days.

But her biggest passion, one that still drives, inspires and informs her career is candy. “I have a lot of candy memories from childhood, but cannot name a favorite.” Dylan, a Duke graduate with a Bachelor’s degree in Art History fulfilled her long time dream in 2001, when she opened Dylan’s Candy Bar, the largest candy shop in the world, at 15,000 square feet of prime real estate in NYC. She is the Founder and CEO of a brand that furthers her love and appreciation of candy into a lifestyle. With 25 stores in around the world, her business success has made her and her family proud.

She travels the world searching for the most amazing candy creations, sort of like an archeologist in a worldwide treasure hunt. “When I travel I collect candy I’ve never seen before in America. I’m fascinated with candy from Spain and Vienna and Asia, specially the way they are presented. I also love the way they sculpt chocolate into bunnies and cathedrals, and the beautiful craftsmanship is very inspiring to me. I wanted other people to have access to that”, says Dylan Lauren. The Laurens are the quintessential American family.

There are more than 7,000 types of candy at her shops, ranging from life-sized Hershey’s Kisses and endless supplies of M&Ms to Gummy Bears (20 different kinds), and nut-free, sugar-free and gluten-free treats, as well as candy themed apparel, jewelry and spa treatments. Her products can also be found at luxury department stores, boutiques and hotels all over the country. The results of her business savvy are annual sales that top the $25 million mark.

There is a correlation between candy, art, fashion and pop culture that is evidenced in the life of Dylan Lauren. She is the author of Dylan’s Candy Bar: Unwrap your Sweet Life (Random House). The book is a declaration of love to all things candy, full of trivia and history, memories, and decorating tips for every occasion from wedding proposals to Thanksgiving. There is also the Barbie doll Mattel created after her likeness. “I felt very honored when they approached me to create Candy Bar Barbie because I thought they were only interested in big celebrities”. When we asked about Barbie being a good role model for little girls, she replied, “Barbie is a beautiful doll, but it can be a challenge for girls sometimes to look as perfect. She is aspirational and fashionable. It is up to the parents to direct their children with everything that they see”.

Among the concerned parents who have become clients of Dylan’s Candy Bar, we found Michelle Obama, who has spearheaded a campaign against childhood obesity. “The former First Lady came into the store once and her daughters have visited several times. They believe in taking candy in moderation. They bought their favorite candies and non edible pieces like pajamas for the girls and some candy themed accessories.” Dylan also believes in taking everything in moderation. She mentions oral hygiene to avoid cavities and encourages daily exercise as a way of preventing obesity.

In the summer of 2011, Dylan Lauren married the handsome hedge-fund founder/partner Paul Arrouet at her parents’ 300-acre estate in Westchester County, NY. As was to be expected, her father designed for her a striking wedding gown, a handmade duchesse-satin, silk-tulle, and georgette-embroidered dress with tiered train. “It was a special collaboration because he knew it would be the most important dress I’d ever wear. He knows exactly what looks good on me and respected my comfort needs and my personal taste”, says the lucky bride. The theme for the grand affair was Marie Antoinette meets Alice in Wonderland meets Willy Wonka in typical Dylan style. A mutual friend who thought Dylan would like Paul introduced them. “Now I always encourage people to not be afraid to set up single friends to go on dates because it has worked for me”, says Dylan about their match. When asked who rules the house she says, “I’d like to say I rule the house because I’m the candy queen; he’d also like to say he rules the house, but in reality I think our dog is the one with the most power in our household”.

Dylan hopes her marriage is as blessed as that of her parents, whose 56-year union sets the standards of love and friendship, not only for the family, but also for an entire nation. Dylan and Paul currently live in New York and love vacationing in Australia and New Zealand. The couple’s favorite charities are animal causes, and they strongly support American Society for the Prevention of Cruelty to Animals (ASPCA) and The Humane Society. In 2015, the couple had a pair of twins, named Kingsley Rainbow and Cooper Blue.

Dylan Lauren’s personal achievements are rooted in her creative interpretation of candy, fashion and art. A successful business woman in her own right, she dreams of emulating her father, who created an empire out of a passion for fine, stylish clothes. “I want to develop a company that is like Walt Disney, something like what my father created, a lifestyle brand, and to expand to locations all over America and abroad”. For this and many other reasons we think Dylan Lauren is the sweetest girl in the world. ■