You are here:
New York City has one of the finest collections of Art Deco buildings in the world. Some of the city’s most famous landmarks, including The Empire State, the Chrysler, Chanin, and American Standard buildings, the Waldorf Astoria Hotel, and Rockefeller Center are examples of the highest caliber in the Art Deco Style. Let’s take a look at the society and the times that produced such exquisite architecture. 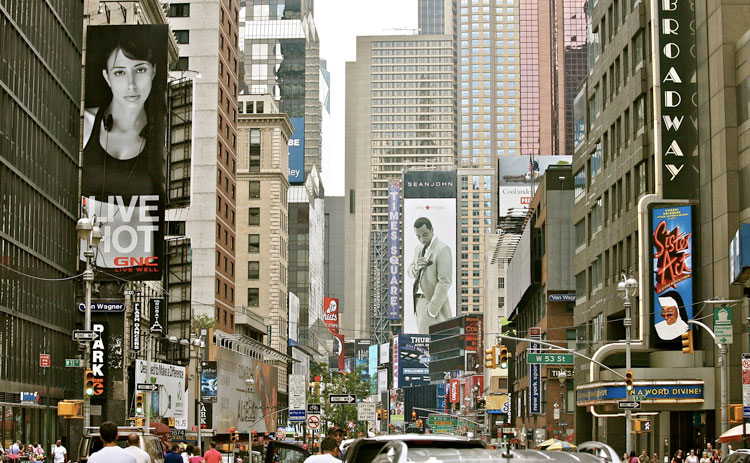 If we turn our gaze to the Roaring Twenties, we’ll find a world coming together after the carnage of World War I. The difficult postwar years triggers an intense desire, among the population, to forget and move on from the disastrous war years. The economy enters a prosperous growth cycle, causing such euphoria that for the rest of the decade, until 1929, the stock market breaks records nearly every day. Prosperity gives rise to a new creed: consumerism. There is a new god: progress, led by scientific discoveries that propel the world at a dizzying pace. The fast expansion of the press and the popularity of radio magnify the impact of the modern lifestyle; theaters, movie houses, and cabarets become new artistic venues with mass appeal. Paris, London, and New York dance to the newly fashionable beat of the Charleston, and the sounds of the blues and jazz fill the world’s nightclubs. Women change their look to assert their independence. They showed their ankles for the first time in history and wore innovative short haircuts; the big fashion labels are established.

This is the breeding ground of a new, powerful and modern America. The United States becomes the engine of the global economy, and pretty soon the Western world embraces the “American Way of Life” in all its optimistic splendor. New York is transformed and becomes the symbol of modernity. Building construction is triggered, and the new structures grow vertically, towards the sky, like never before. The skyscraper is the marvel if the times. Art Deco arrives in New York just in time and, almost overnight, becomes the most fashionable architectural style. This markedly bourgeois trend was born in Paris in 1900 as a purely decorative expression.

In 1925, at the International Exhibition of Modern Decorative Arts and Industry in Paris, Art Deco establishes itself as the avant-garde style. It is inspired by the early modernist movements of the 20th century: art nouveau, constructivism, cubism, and futurism, and informed by rationalism and the recent archeological discoveries in Egypt. In the US, artists and architects imbue the avant-garde with Native American elements. Eventually, new industrial products, manufactured with inexpensive materials like plastic and light metal, replace the opulent construction methods used during the early days of Art Deco. It becomes so hot that writer John Dos Pasos refers to the construction boom as “Deco mania”.

The Art Deco Society of New York has 57 buildings listed in its directory. Some of them have long become the iconic images of the city for their artistic and historical value. Listed as a National Historic Monument since 1986, it was designed by American architect William F. Lamb and finished in 1930. For forty-one years, it remained the world’s tallest building. The emblematic main entrance stands out for its symmetry, the elegant cut of the stones, and windows flanked by two large sculptures. But perhaps the most significant area is the impressive, monumental and luxurious lobby that displays the skyscraper´s decoration. 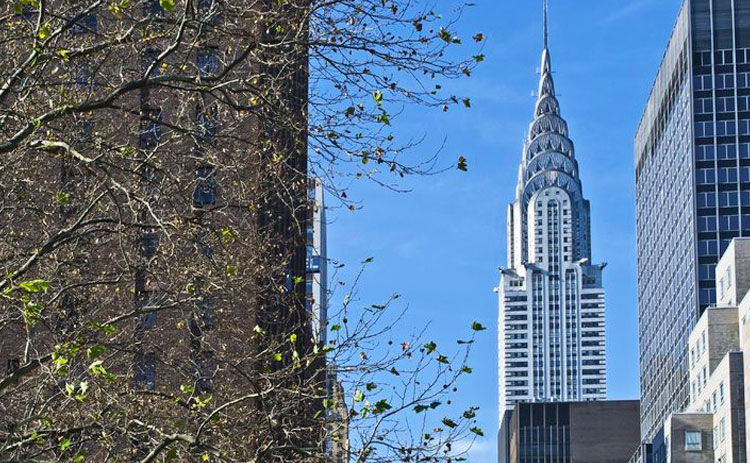 Designed by architect William Van Allen at the request of automaker Walter Percy Chrysler, its construction was completed in 1930. The building was designed using elements that mimic automobile parts, including the ornamentation, which features symbolic hubcaps, like the ones used on Chrysler automobiles of the era. Eagle-shaped gargoyles adorn each corner of the 61st floor, and 30 floors below we find spectacular replicas of Chrysler’s radiator caps that make this building one of the most beautiful examples of high Art Deco in the world. The Edward Trumbull mural that decorates the lobby (at the time the largest in the US) represents images of progress, movement, transportation, and energy.. 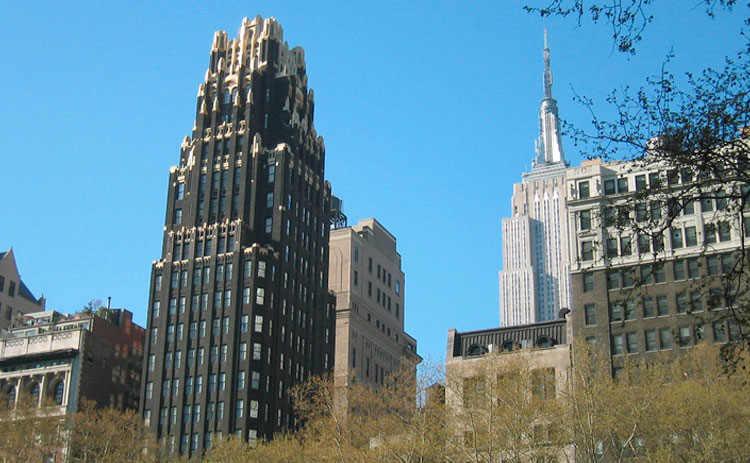 Designed by architects Raymond Hood and John Howells in 1924, it reaches an altitude of 23 floors and stands out for its black brick facade, gilded Gothic motifs and the entrance, decorated with marble and black mirrors. It is listed as a National Historic Monument and is popularly known as the Radiator since it originally housed the offices of American Radiator and Standard Sanitary Company. The Chanin building was designed by Sloan & Robertson and is also listed as a National Historic Monument. Built in 1928, the building is clad in limestone and terracotta. The upper part is elegantly topped with brick; at the lower end of the building, along the facade, the terracotta bas-reliefs represent flora and fauna. Jacques Delamarre decorated the lobby with bronze panels depicting male figures, plant motifs, and technological advances such as airplanes, trains, and automobiles. This vast complex includes 19 commercial buildings, including the world-famous Radio City Music Hall, founded by the Rockefeller family and designed by architect Raymond Hood. A city inside a city, both the architecture and decoration are pure Art Deco. The sculptor Lee Lawrie created an emblematic relief titled Wisdom, an allegory to reason and knowledge. Artists Diego Rivera, Josep María Sert, and Frank Brangwyn were in charge of major works for the interior decoration as well. Opened in 1931, the building designed by architects Schultze & Weaver was the world’s first Art Deco hotel, and also the tallest with 47 floors. It soars to 630 feet of dark brick, crowned by two large towers. The halls are richly decorated with murals, mosaics, and chandeliers. The centerpiece of the lobby area is a magnificent clock purchased by the Astor family during the 1893 Chicago World Fair. Louis Rigal’s Wheel of Life mosaic holds great significance for Art Deco lovers.

By the time New York City hosted the 1939 World Fair, Art Deco was already in decline. World War II followed, and other art movements would take hold after the war, leaving behind New York’s passion for Art Deco skyscrapers.  ■